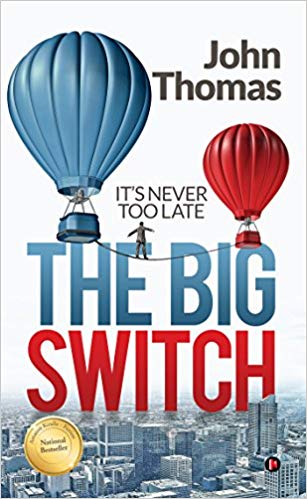 “The Big Switch: It’s never too late” represents a very true picture of the life of a middle-class family youth who takes on the career as dictated by their parents and continues with the same just to support his family.

Our story starts with Keith, who is a software engineer and works as a programmer in H&G India. He also has a girlfriend whom he loves a lot. He is a dedicated employee and doesn’t mind working late or over weekends to get the job done. Due to this, he is unable to devote time to his personal life. Over a period of time, he doesn’t get the appraisal that he expected and during this same time, his girlfriend breaks up with him, leaving him utterly alone and dejected. During this phase of sheer loneliness and depression, he attends a cricket match and notices the zest in the players that they possess for every game and he begins to wonder how come they are so happy all the time?

It is at this time that his company then decides to send him on a 2-week visit to Bangalore to help out with a project there and that’s where he meets Ramesh, his new manager. A vibe of positivity and a smile on the face is what draws Keith closer to Ramesh. Over his 2-week discussions with Ramesh, Keith realizes that he is in the wrong career and needs to be making a career switch. However, he is surrounded by questions like is it too late to make a switch at the age of 24? Will it be a mistake to follow his passion and work on rediscovering himself?

Upon his return to Mumbai, Keith is a changed person and decides to live his dream and follow his passion. The book very well depicts his thoughts and feelings and his trials and tribulations as he undergoes the journey of rediscovering himself and following his heart. Will he succeed? Or Is it really too late for him?