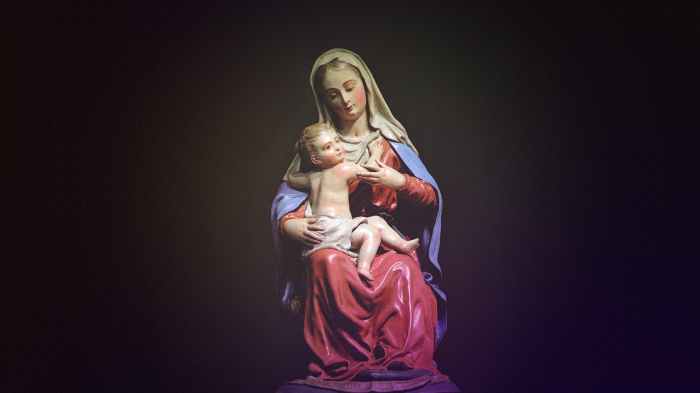 “For God so loved the world
that he gave his one and only Son,
that whoever believes in him
shall not perish but have eternal life.”
JOHN 3:16

Christmas is the celebration of kindness and love. Whether Christian or not, we all love Christmas. It is that time when we are reminded of the kindness of Jesus Christ. In today’s fast-paced world we often forget the core virtues of humankind. We often forget that God had sent his only Son to save all of us. Whether you are religious or not, you should at least read once the story of Christmas. Let’s all see how it all started with a baby named Jesus!

About 2000 years ago in a village called Nazareth, lived a poor young girl named Mary. One day an Angel came to visit her and foretold that she would soon conceive God’s own son by the power of the Holy Spirit. At this news, Mary was scared as she was a virgin. But the Angel asked her not to worry and have complete faith in God. The Angel also said that the name of her son should be “Jesus” or the saviour as He would save people from their sins! Mary was now full of awe, trust and gratitude. Days passed and over time she became pregnant.

Mary was engaged to a young carpenter named Joseph and so she realised that she must give the news to him. She also said about the angel’s message. Listening to the entire story Joseph at first was shocked. He couldn’t understand as what he should be doing and he wanted to break the engagement. In fact, under the strict Jewish law in those ages, Mary could be stoned to death as a punishment for her infidelity. But Joseph was a kind-hearted man. Although he couldn’t believe the story completely still he decided to keep this knowledge to himself. He treated his beloved Mary with kindness and respect.

After this, an Angel came in Joseph’s dream. The Angel confirmed Mary’s story and asked him to marry her as that was God ‘s will! The Angel explained that Mary’s son will be the Messiah or the Soul Saviour. When Joseph was awakened he was full of gratitude. He realized that God must have chosen him and Mary for a greater reason! So he gladly wanted to accept Mary as his wife.

But at the time, the Roman leader Caesar Augustus announced that every person in Rome must register their marriages in their hometown. Joseph was required to go back to Bethlehem to get married to Mary. So, they travelled the long distance together. Mary became tired of the journey but still, she persevered. When they reached Bethlehem, all the inns were full. So Mary gave birth to a beautiful son in a stable. She was worried to keep the baby warm and wrapped him in cloths and placed him in a manger, from where the animals ate their hay!

At this time, an Angel appeared in the sky nearby. The shepherds who were returning home with their cattle were stunned at the scene. The Angel announced that the Saviour of the world has just arrived! He was born to Mother Mary in Bethlehem. Hearing this the shepherds were over joyous and they cried- ” Let’s go to Bethlehem! Let’s see the Christ – child!”

All of them hurried to the small village. The shepherds said to the others on their way about the message from the Angel and the news about the little baby, the Messiah. A crowd was formed and they all went to find the baby and on their way praised the Lord! They finally found the baby along with Mary and Jesus. Everyone started to praise the child and was delighted to see him with their eyes.

When Jesus was born, the wise men in the East saw a big star in the sky. They realised that they must follow it as the star signified that a King was born. So, they set off to meet the Lord. At this time, Herod was the King of Judea. He met with the Magi and requested them to report back after they have found the baby. He explained that he wanted to worship the child. But in reality, he set an intention to murder baby Jesus.

So, then the wise men followed the star and eventually found Jesus with Mother Mary and Joseph in Bethlehem after about two years of journey. The Magi worshipped the child and offered him gold and other gifts. The Magi were then forewarned in a dream that Herod was plotting to kill baby Jesus. So they didn’t return to Herod. They went for their own country in the East by a different route.

When the wise men returned, Joseph received a message from an Angel in a dream. The Angel warned that Herod will search for Jesus and try to kill him. So, Joseph immediately started a journey in the night with baby Jesus and Mary. They left for Egypt where they stayed until Herod was dead.

The incredible story of Christmas as given in the Holy Bible is awe-inspiring and surreal. We also see that God has chosen ordinary people to perform extraordinary events! Mary and Joseph were young, poor and plain but God chose them to be his medium. He extended his grace to the poor, uneducated shepherds who received the message from the Angels that the Son of God has arrived!

We can also be surprised at how ordinarily the Saviour entered in this world! Jesus was born in a stable and his bed was a manger filled with straw. There is truly a big lesson conveyed through the Bible Christmas story. God can choose anyone to be a part of a higher purpose. One must be humble and grateful to receive God’s grace because He chooses the worthy from even simple, ordinary men and women.